NHL Star Evander Kane Talks With Boomi About His Passion for Technology, Diversity, and Inclusion 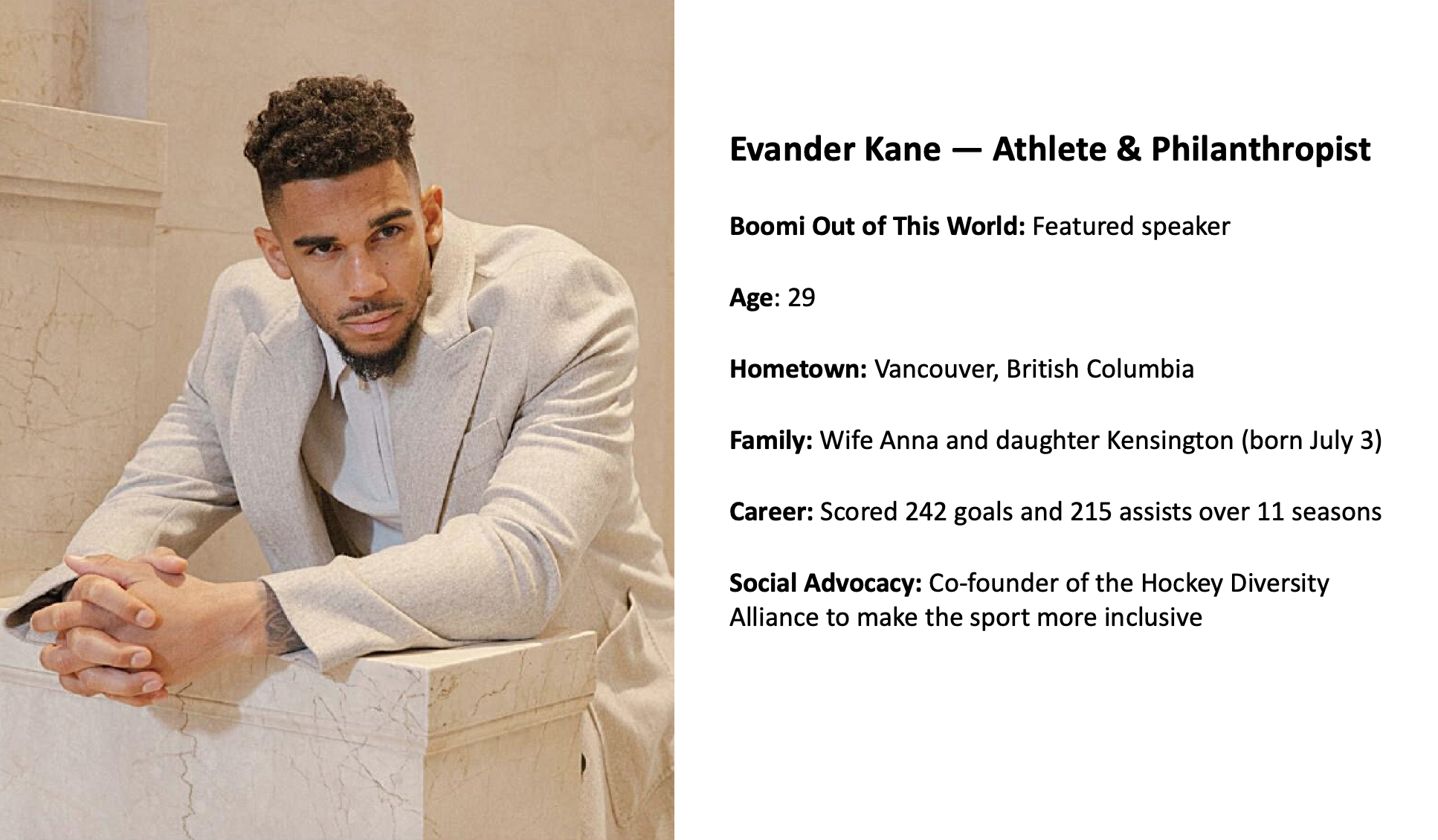 Evander Kane has been one of the most electrifying players in professional hockey since bursting onto the scene as a teenager. This past season, he led the San Jose Sharks in goals scored.

But his biggest impact now is being felt off the ice. He’s establishing himself as one of the most passionate voices in sports advocating for social change.

Kane, one of the few players of color in the NHL, recently co-founded the Hockey Diversity Alliance to bring greater inclusion to the league. In this time of profound change, Evander also has been vocal about addressing racial injustice and inequity in society.

“We need athletes across all of the different sports to get involved with social justice issues,” Kane says. “We all know that sports have such a big impact. Athletes can help bring change.”

Making a difference is nothing new for Kane. His philanthropic causes are why the Sharks nominated him for the annual NHL award honoring the player who makes the most significant humanitarian contribution to his community.

We’re thrilled to have Kane as a featured speaker at Boomi’s upcoming Out of This World virtual adventure. Here’s a short Q-and-A to give you insight into his drive for greater diversity, passion for technology, thoughts on being a new father, and how he has maintained a competitive mindset during the pandemic.

We’re very proud of our inclusion efforts at Boomi. Why is the Hockey Diversity Alliance so important to you?

Evander Kane: With everything going on in society, it just hit home with Black players in our league. We realize that nobody has done anything in our league. And if we don’t do something now and stand up for what we believe in, we’re going to be in the same situation 20 years from now. So, we decided to form the Hockey Diversity Alliance to draw attention to racism in hockey. We’re not extremely diverse when compared to other sports. It’s important to me because I’ve seen so many minority kids get pushed aside in both the U.S. and Canada. I hear stories from parents talking about incidents their children have faced with racial bias or comments they hear on the ice. We want to be the group that makes a difference for those families.

Why is there such a focus on the grassroots level?

Evander Kane: That’s where the change is truly going to start. As a kid growing up, my favorite basketball player wasn’t Steve Nash or Larry Bird. It was Allen Iverson. I could relate to him and wanted to be like him. I know that everybody in Canada loves Sidney Crosby. But if you go into these Black and brown communities, they don’t know him. The biggest thing that the NHL has missed is promoting players who look like [the people in these communities.] Financially, it would create a whole new revenue stream because it would help grow the game.

Have you always wanted to give back to the community?

Evander Kane: I didn’t grow up with a whole lot. I’m a big believer that it’s better to give than receive. I enjoy putting smiles on the faces of children. I’ll do anything to brighten somebody’s day, especially a kid. It makes me feel good. I’ve also done a lot of work around homelessness. Everybody should have a home. We all see people on the streets, and who doesn’t want to help?

COVID changed the playing field for all of us. How do athletes maintain a sense of team?

Evander Kane: It really throws a wrench into everything. Normally this would have been the start of training camp when teams get back together. So, it’s definitely different. The uncertainty is something that we all feel. There’s a lot of time on the phone or apps like Zoom and WebEx. I’ll say that it’s had a big impact on our formation of the Hockey Diversity Alliance. When you’re not having discussions in-person, it’s difficult. We’re all in different cities and time zones. I imagine that every business can relate to that.

How are you personally keeping your focus?

Evander Kane: Everything is so up in the air and hard to predict. As an athlete, you try to stay ready, make sure you’re in the best shape possible and prepared for anything. But for me, hockey is only part of it. Our daughter was just born two-and-a-half months ago. Going through that first birth with COVID and the restrictions in hospitals was a unique experience. I couldn’t go to certain doctor appointments. And then you think of people passing away and their relatives not being there because of COVID. Just being at the hospital made you see the negative effect that it’s had on so many people.

Evander Kane: It’s hugely important to me. So many of the advancements we’ve seen in fitness testing are because of technology. I’ve seen the benefits. I recently invested in something called the Genius App Manager. It’s a productivity and health app to help create accountability for kids. Kids are on their phones so much. The app gives parents a way to help their kids set and manage goals, whether it’s physical activity, homework, or chores. We’re looking to begin partnering with schools, too. It’s just a great example of technology being used for good.

How will you know that you’re changing the face of hockey?

Evander Kane: If you look at team photos of NBA teams starting in the 1960s, you can see the evolution of the game. But if you go back to an NHL team photo from then and compare it to one now, it looks the same. What NHL team photos look like 15 years from now will be the ultimate litmus test.

Register for Boomi’s Out of This World, launching September 29, to hear more from Evander Kane and others who are passionate about driving change.